The Importance of Cybersecurity

Cybersecurity has become an increasingly bigger problem for large and small businesses alike. Although everyday we learn more about how to defend ourselves from these attacks, the industry still has a long way to catch up with current threats in the cyber world. That’s why it is important to get a picture of the current cybersecurity industry in order to gain awareness and form practices to protect your home and business.

A report by Cybersecurity Ventures predicts that 6 trillion will be lost due to cybercrime, up from 3 trillion in 2015. Cybercrime costs include damage and destruction of data, stolen money, lost productivity, theft of personal and financial data, forensic investigations, and much more. 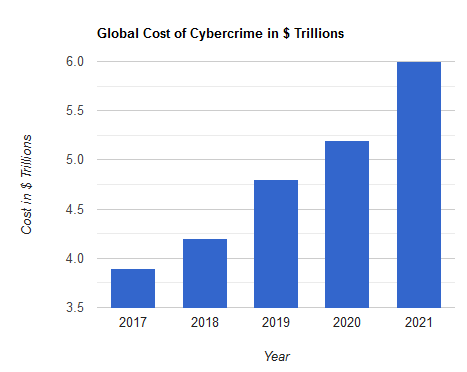 As the cybersecurity industry struggles to keep up with current cybercrime threats, networks are left extremely vulnerable to attacks.

A data breach happens when sensitive information is leaked to an untrusted environment. The resulting damage can include disclosure of company and personal data.

Just as when any other disaster strikes it is imperative that you have a plan to react to the situation. However the majority of small businesses report not having one.

Within emails, 45% of detected malware was sent through an Office document file to small businesses, while 26% were sent through a Windows App file

With the time between the attack and detection spanning around half a year, there is a huge amount of information able to be obtained by the hacker.

Ransomware is a form of malware that threatens malicious intent to a victim’s data unless a ransom is paid. The U.S. Department of Justice has described ransomware as a new method of cyber attacks and an emerging threat to businesses.

This is 57x more than it was in 2015, making ransomware the fastest growing type of cybercrime.

Many unsuspecting small businesses are caught off guard by attackers and sometimes, the damage is so great that they are forced to shut down entirely.

Sensitive files contain credit card information, health records, or personal information subject to regulations like GDPR, HIPAA and PCI. A large portion of these files are easily obtainable by cybercriminals.

Ransomware is the #1 threat to SMBs with about 20% of them reporting having fallen victim to a ransom attack. Also, SMBs who don’t outsource their IT services are bigger targets for attackers.

The study was conducted by Michel Cukier, Clark School assistant professor of mechanical engineering. The researchers discovered which usernames and passwords are tried most often, and what hackers do when they gain access to a computer.

A comprehensive analysis done by SecurityScorecard exposed alarming cybersecurity vulnerabilities across 700 healthcare organizations. Among all industries, Healthcare ranks 15th out of 18 in Social Engineering attacks, revealing a pervasive security awareness problem among healthcare professionals, putting millions of patients at risk.

Spear phishing is the act of disguising oneself as a trustworthy individual in order to trick victims into leaking sensitive information. The majority of hackers will attempt this, making proper awareness and training crucial to deflecting these attacks.

One of the simple things you can do to improve your security is to use strong passwords. Over half of confirmed data breaches could have been stopped if a more secure password was used.

With nearly all malware making its way into your network through a malicious email, it is imperative to teach employees to spot and deal with social engineering and phishing attacks.

Data shows that 300 billion passwords will be used around the world in 2020. This suggests a huge cybersecurity risk stemming from hacked or compromised used accounts.

Due to the nonstop growth of information technology an extremely wanted career lies in cybersecurity. However, even the number of jobs fails to satisfy the increasing demand.

Gamers are more connected to information technology than the average person. 75 percent of these managers would consider hiring a gamer even if that person had no cybersecurity training or experience.

The salary shows very few industries that will ever see such a strong demand. Especially in the near future, qualified cybersecurity analysts will be in high demand with few to go around.

This reveals how careless we are with the personal information we leave online. Using a strong mix of letters, numbers, and symbols is the key to keeping your information safe along with using a different password for each account.

Like other criminals, hackers will attempt to cover up their tracks with encryption, which could lead to difficulty in tracing back their crimes and identity.

Cryptocrime is becoming a new branch of cybercrime. Around $76 billion of illegal activity per year involves bitcoin, which is close to the scale of the U.S. and European markets for illegal drugs. In fact 98% of ransomware payments are made via Bitcoin, making it hard to track down hackers.

The healthcare industry is digitizing all of its information, which makes it a target for cybercriminals. This dynamic will be one of many contributors to the growth of the healthcare security market over the next decade.

Organizations within all sectors and industries continue to find it difficult to find the security resources they need for the fight against cybercrime.

“Until we can rectify the quality of education and training that our new cyber experts receive, we will continue to be outpaced by the Black Hats.”

KnowBe4’s Security Threats and Trends Report indicates that nearly a third of surveyed organizations don’t separate their security budget from their annual IT capital expenditure budget. With the number of data breaches and ransomware attacks making headlines globally each year, every company should allocate time and money into improving their cybersecurity.

Along with businesses and corporations being breached and user information being compromised, social platforms have also seen similar attacks. According to Bromium, the accounts of more than 1.3 million social media users have been compromised in the past five years

Seems that the majority of vendors don’t live up to good business ethics and prefer to keep a data breach they caused a secret from their client. This can lead to completely unnoticed data breaches where hackers can leak sensitive information undetected.

Use two-factor authentication and practice good encryption whenever possible, it could save your home or business.

This vulnerability only really applies to targeted attacks, where the hacker is taking time to specifically find an entry point on your site. It happens most often with WordPress sites when the attacker attempts to exploit vulnerabilities in popular plugins.

Having an adequate amount of knowledge in the field of cybersecurity is crucial to protecting your home and business. With the rate of cyber attacks increasing steadily with technology, being aware and prepared for a cyber attack is necessary knowledge for current day and the future. Luckily, there are many ways you can protect yourself. Investing a proper budget into cyber defense and educating yourself and employees on how to stay safe online can go a long way in ensuring the safety of your information.